Lazada is the leading online shopping platform in Southeast Asia, more specifically present in Indonesia, Malaysia, Philippines, Singapore, Thailand and Vietnam. This ecommerce platform was founded by Rocket Internet and has raised around 650 million dollars with investors such as JPMorgan & Tesco. In this case study we will be explaining briefly our contribution in their growth, what is commonly called; scaling agile.

Lazada is a young company and had been growing at a very fast pace. The main objectives were to increase scalability and to grow & improve the performance of the application as well as the velocity at which features were delivered. Which is why they hired us as a mobile CTO.

As a growing company, Lazada was facing the common problem that we usually find in big organizations; a big team that keeps on growing implies that many people has touched the code. You can imagine the situation when we had to decouple all the software structure, it actually took us 3 months just to do that part! Also, as we were going for an Agile transformation, this meant that every single person in the company needed to know what was going on and how to work with Agile methodologies; project manages, team leads, DevOps, engineers, etc.

As we were dealing with a very big team, we studied the amazing case of Spotify scaling agile and got inspired by that. We followed their work structure and I won’t go too much into details but the main idea is the following:

You’ve got squads, which is a sort of self organized small team that chooses its own way of working. Although there are no real leaders there is a technical lead that has more knowledge and helps the team go into a certain direction. There is also a product owner to each squad and he is the one that has to prioritize the work that has to be done, but again, he is not the one that chooses how to do the work. Product owners of each squad communicate between each other to be sure it all works good. Then you’ve got tribes. A tribe is formed by various squads (all working on the same area, let’s say development) and each tribe has a tribe lead that makes sure that all is going well. In each squad of each tribe, there are people that work and that have very similar skills. These people form a chapter. Finally, guild. Here’s it’s more about a group of people that share the same concerns and that want to share with each other, a perfect example would be an Agile coach. 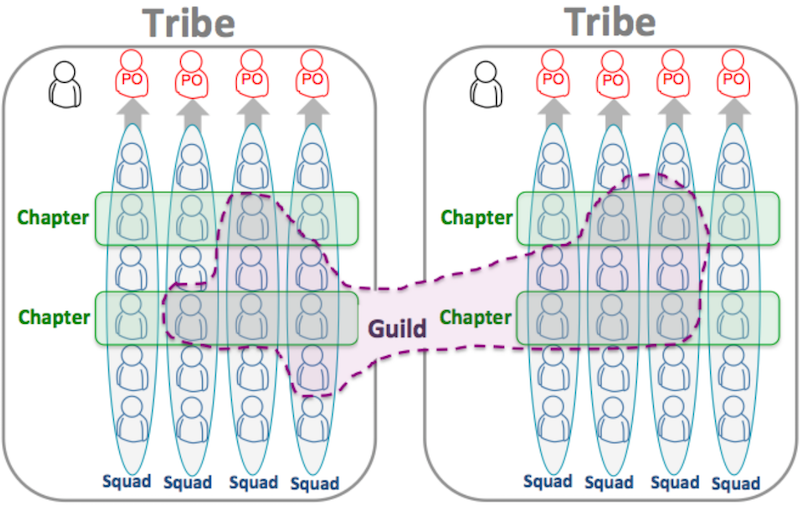 The project lasted a year and we did an Agile transformation; in fact we moved from the classic waterfall methodologies to Agile methodologies and this phase took 4 months. As mentioned earlier, the code had passed through the hands of many people and that means that before implementing the continuous integration we had to pass through decoupling for 3 months.

Let’s keep in mind that you can’t really be agile if you are not able to create a user story that is well done. So for that part, it was quite challenging to teach all product owners on how to really write down a good user story and how to split epics into user stories. Challenging yes, but not impossible of course. Once that product owners were mastering that part, it became possible to give small features to developers and from that point, let’s just say that continuous integration became much easier. Finally, we did pair programming with team leads so they could then teach the rest of the team how to write good unit test, solid principles and test driven development.

Dealing with a company like Lazada that was evolving that fast was an amazing challenge. Everything was on a big scale, specially teams and structures. The fact that we had to work with multiple teams and with a huge application where there was almost 8 million users and +500 servers really helped us learn how to make an agile transformation from waterfall with a huge team; scaling agile. What does that mean in numbers?

Getting Started with Pandas – Lesson 1